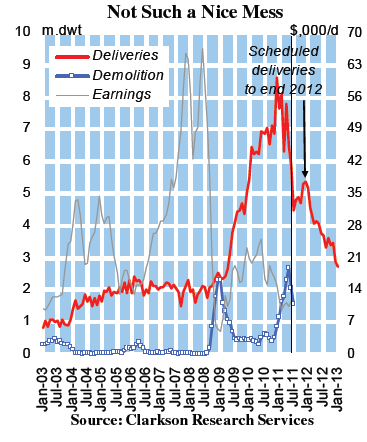 Oliver Hardy was a fine comic actor who had a very successful film partnership with Stan Laurel. Their films are always worth watching again. Stan is repeatedly blamed by Ollie for the on screen scrapes that the duo gets into, with the condemnation: “Well, here’s another nice mess you’ve gotten me into”. He could not have expressed it better were he a ship owner operating in the dry bulk markets.

The problems of the dry bulk market derive from the super-boom which began in 2003 and peaked around mid-2008. During that period the balance in the market was fine. The fleet expanded by 6% per year or around 1.7m dwt a month and dry bulk trade by only a little less. Although deliveries averages around 2.1m Dwt per month and scrapping no more than 0.2 m dwt per month, monthly earnings averages around $28,000/ day, and peaked at around $65,000/day at end- 2007.

Followed by a fine mess...

It was then that the bulk market got itself into a fine mess. Earnings were poured back into investment in new ships and over the next 21/2 years from 2009 the fleet expanded by 13% per year on average. Since 2008, an average of 5m dwt per month, peaking at 8.5m dwt at end 2010 has been delivered into the bulk fleet.

Unfortunately, at the same time, bulk trade growth slumped to 3% in 2008 and declined in 2009. Earning collapsed and although this encouraged some scrapping, 0.7m dwt per month in 2009-2010, risking to 2.2m dwt per month this year, that has not proved to be much of an automatic stabilizer for the market. Indeed, the age of bulk carriers scrapped this year remains at almost 30 years in the recession of the mid 1980s it was under 19 years. There is some ways to go for scrapping to have some impact on the balance.

…. And a Messy Recovery

The bad news is that the order book for bulk carriers still stands at 43% of the fleet at mid-year. At the current schedule of delivery that means an average of 4.3m dwt of new tonnage though almost 40% less than for the previous 18 months, deliveries on that scale will remain quite a challenge for the market to absorb.

With average earnings down to around $9,500/day, scrapping might come to the rescue, and trade is currently estimated to grow by 4% this year. Both will need to contribute more if balance is to be restored to the dry bulk market.

So there you have it, another re-run of an old shipping script with the same plot. Poor owner gets rich from the good times; over invests in new tonnages; good times turn to bad and new vessels are delivered into a weak market. Perhaps lessons will be learned from yet another repeat. You couldn’t make it up; or if you did it wouldn’t make a Laurel and Hardy comedy

(According to Clarkson Shipping Intelligence Weekly)