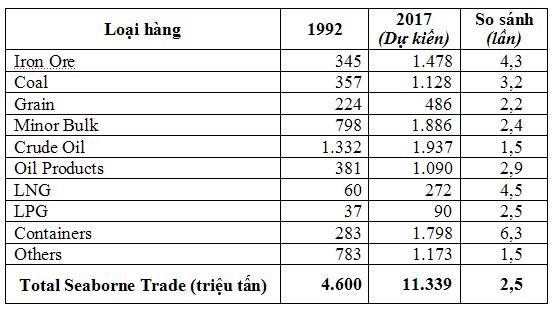 Seaborne trade provides the platform upon which the shipping industry operates. Back in 1992 world seaborne trade stood at an estimated 4.6 billion tones and in comparison current projections suggest that in 2017 it will reach 11.3 billion tons. That’s 2.5 times bigger than 25 years ago (see table). Iron ore trade is projected to be 4.3 times larger than back in 1992, LNG trade 4.5 times larger and container trade a mighty 6.3 times more volumninous. The 2017 sea-borne trade estimate represents about 1.5 tonnes per person on the planet. That’s quite some performance all round and keeps the world of shipping turning.

My how big you’ve grown

Meanwhile, shipping capacity has also expanded equally rapidly. The fleet has grown by a multiple a little greater than that registered by trade over the 25 year period. At the start of 2017 the global fleet totaled 1.86 billion dwt compared to 621 million dwt at the start of 1992. That’s a multiple of 3.0 times larger. Of course, over the period there have been changes to vessel productivity, not in the least the moderation of service speeds in many sectors in the post-Lehman down turn.

What things cost these days

Alongside these significant changes, the value of shipping assets has seen more mixed trends. A 5 year old VLCC was 8% cheaper at the start of 2017 (in current terms) than at the start of 1992 but such us the state of play in the bulkcarrier market that a 5 year old Capesize is 43% cheaper. Adjust these for inflation and the values look even lower. On the other hand the scrap value of ships is higher $/ldt ship steel scrap price.

VOSCO are operating a fleet of 12 bulk carriers and...