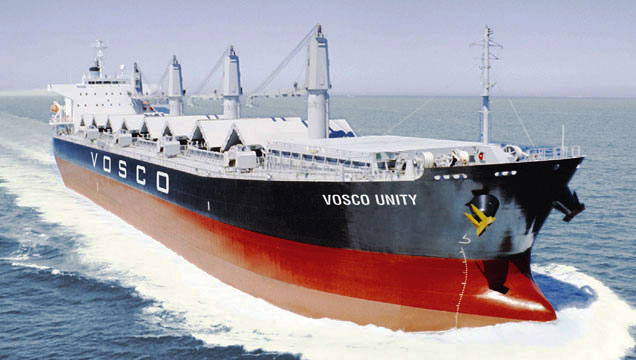 + The first two Vietnamese vessels to be awarded Hero Award by President Ton Duc Thang were Tu Luc 06 and Tang-kit 154. They were granted this honor on 7th June 1972 and 31st Dec 1973 respectively.

+ On 9th Nov 1973, the vessel Hong Ha 4.388 dwt marked the first time that a Vietnamese vessel has ever called at Japan, paving the way for the establishment of economic relations with overseas partners and the development of ocean-going fleet.

+ In 1974, Vosco made a leap forward to be the first Vietnamese shipping company who purchased three vessels Song Huong, Dong Nai and Hai Phong through purchased-loan method. Up to now, more than one hundred modern vessels have been operated and managed by Vosco. Our debts and interests arising from purchasing of vessels were cleared after an average of six or seven years.

+ On 13th May 1975, right after the national’s reunion, vessel Song Huong with its capacity of 9.580 dwt, commanded by Capt Nguyen Tan Nghiem was the first northern vessel to callat Nha Rong port. This landmark laid the very first foundation for the sea-going trading between the North and the South, and significantly contributed to national economic recovery.

+ In Oct 1975, two tankers Cuu Long 01 and Cuu Long 02, the biggest tankerof Vietnam at that time, were the first ones to navigate anew route to East Africa and the Southern Europe.

+ In 1977, the vessel Song Chu called at Australia and India, the first timea Vietnamese vessel had done so, extending Vosco’s foreign economic activities.

+ In 1982, Vosco set a new milestone by opening the new route to West Africa and America. M/v.To Lich and Thai Binh were thefirst two Vietnamese vessels to call there, marking the expanding of Vosco’s fleet to all over the world. M/v. Thai Binh was also recorded as the first Vietnamese vessel to sail around the world by the Vietnam Record Book Centre.

+ Vosco took delivery of the modern specialized bulk-carrier Morning Star, 21,353 DWT on 24th July 1996. The purchasing of thisvessel opened up a new chapter for the company and marked Vosco's movementinto investinginmodern and specialized vessel trading worldwide. Our business results improved thanks to the operation of this type of vessel.

+ In 1999, Vosco was the first shipowner to order three vessels (Vinh An, Vinh Thuan, Vinh Hung) at Bach Dang shipyard. These vessels were the biggest ones that a Vietnamese shipyard could build at that time. This significant event laid the improtant foundation for the Vietnamese Shipbuilding Industry.

+ Calling at Charleston port on 2nd May 2000, M/t Dai Long, 29.996 dwt was the first vessel bearing Vietnamese flag to goto the USA after the normalization of relation between Vietnam and the USA.

+ In 2002, Vosco was the first Vietnam Shipping Company to apply the International Ship and Port Facility Safety Code (ISPS Code)

+ On 29th Mar 2006, Vosco Maritime Training Centre was established with the aim that all Vosco crew would have the abilities to carry out his work well and effectively. Among the shipping enterprises in Vietnam, Vosco is the only one who manage a crew training center equipped with an adequate and modern Bridge Simulating Room, Engine Simulating Room and Visual Practical Room

+ In 2008, two container vessels Fortune Freighter (561TEU) and Fortune Navigator (560 TEU) were purchased and we deployed from the North to the South of Vietnam and vice versa. Container liner transportation is a potential market and operating these 2 vessels hightlighted Vosco’s active participation in this sector.

+ On 17th Apr 2010, Vosco's first modern, specialized supramax named Vosco Sky, 52.523 DWT built 2004 in Japan was taken delivery. This vessel mark a milestone in the development of the company.